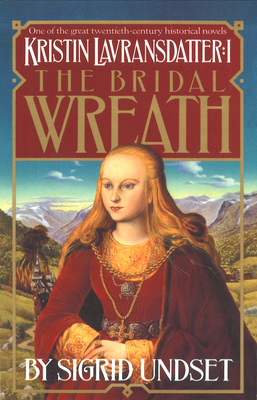 The acknowledged masterpiece of the Nobel Prize-winning Norwegian novelist Sigrid Undset, Kristin Lavransdatter has never been out of print in this country since its first publication in 1927. Its story of a woman's life in fourteenth-century Norway has kept its hold on generations of readers, and the heroine, Kristin—beautiful, strong-willed, and passionate—stands with the world's great literary figures. Volume 1, The Bridal Wreath, describes young Kristin's stormy romance with the dashing Erlend Nikulausson, a young man perhaps overly fond of women, of whom her father strongly disapproves.

Sigrid Undset is a major figure in early twentieth-century literature. A Norwegian born in Denmark in 1881, she worked with the Norwegian underground during the Second World War, fled to Sweden in 1940, and later came to the United States. She is the author of many works of fiction as well as several books for young readers and a number of nonfiction titles. Her novels encompass a variety of settings and time periods, ranging from medieval romances such as the Kristin Lavransdatter trilogy—generally considered to be her masterwork—and The Master of Hestviken tetralogy to modern novels such as The Winding Road, Ida Elisabeth, and The Faithful Wife. She was awarded the Nobel Prize in Literature in 1928. Sigrid Undset died in 1949.

“Sigrid Undset's trilogy embodies more of life, seen understanding and seriously…than any novel since Dostoievsky's Brothers Karamazov.” —Commonweal“No other novelist has bodied forth the medieval world with such richness and fullness.” —New York Herald Tribune