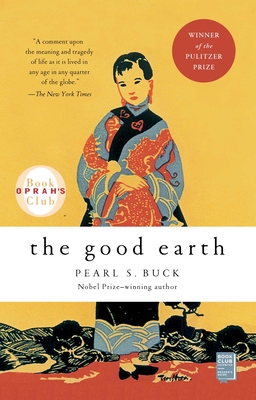 The timeless Pulitzer Prize–winning masterpiece following a humble farmer’s journey through 1920s China returns with this beautifully repackaged edition that celebrates its nearly ninety years as an American classic.

Travel to 1920s China, a time when the last emperor still ruled and the sweeping changes of the twentieth century were distant rumblings, with this timeless, evocative classic tale of the honest farmer Wang Lung and his family as they struggle to survive in the midst of vast political and social upheavals.

Nobel Prize and Pulitzer Prize winner Pearl S. Buck traces the whole cycle of life: its terrors, its passions, its ambitions, and rewards. “A comment upon the meaning and tragedy of life as it is lived in any age in any quarter of the globe” (The New York Times), this brilliant novel—beloved by millions—is a universal tale of an ordinary family caught in the tide of history.

Pearl S. Buck (1892–1973) won the Pulitzer Prize for her novel The Good Earth and, in 1938, became the first American woman ever awarded the Nobel Prize for literature.

“A beautifully written novel that follows one family's dreams and nightmares across a changing Chinese landscape. And, Oprah says, 'It's also juicy as all get out!'"—Oprah.com

“A comment upon the meaning and tragedy of life as it is lived in any age in any quarter of the globe.” —The New York Times

“One of the most important and revealing novels of our time.” —Pittsburgh Post Gazette

“One need never have lived in China or know anything about the Chinese to understand it or respond to its appeal.” —Boston Transcript